OK kids, let me catch you up. On June 29, Cross Fit tweeted this fake coke ad: 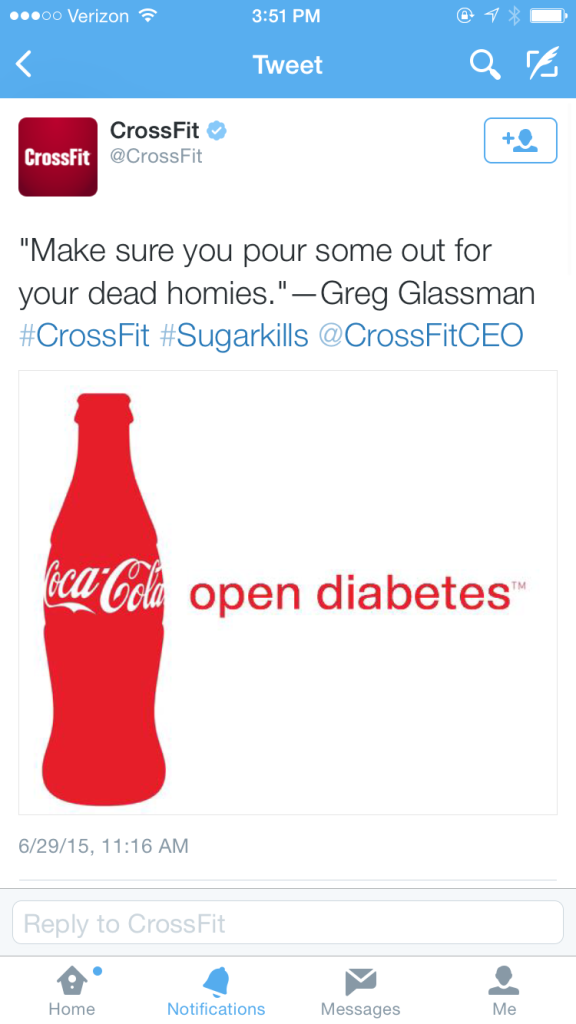 Nick Jonas, who recently “came out” publicly as a Type 1 Diabetic, fired back: “This is not cool. Please know and understand the difference between type one and type two diabetes before making ignorant comments. Sensitivity to all diseases, and proper education on the cause and day to day battle is important.”

Like a ranting lunatic, Crossfit has spent the last day and a half blasting their twitter feed with all sorts of defensive responses.  To Jonas, they said this:

“Anyone can get T2 diabetes, even those with T1. Stop assuming we don’t grasp the difference and help us raise awareness.”

And then they said this:

“We would love to have @nickjonas support our fight against T2D, sadly his relationship with @CocaCola likely precludes that.” (BURN!)

They have posted links left and right to articles which connect overconsumption of sugar with Type 2 Diabetes, attempting to justify their fake ad. Meanwhile, the rest of the internet has responded in turn (I know we wouldn’t have expected any less of it!), slamming CrossFit, defending CrossFit, slamming Jonas, defending Jonas. Some of the most vehement responses have been that Nick Jonas, by attempting to differentiate so wholly between Type 1 and Type 2 diabetes, was actually shaming those with Type 2 diabetes (I guess in the sense of “hey Crossfit, us Type 1s are offended by your tweet that shames people who drink Coke by implying that they’ll get diabetes – please just reserve that shaming for the Type 2s!”)

Shame? Disease? Diabetes? I light up like a child on Christmas morning! WHY YES I WILL INVOLVE MYSELF IN THIS CONVERSATION!

I have been following this “situation” (although lets be real: it’s twitter. “Situation” gives it far, far too much credibility) with rapt attention, and since you all are dying to know my responses, I present them here:

My understanding of CrossFit is that you’re in a scary looking gym surround by people who encourage you to literally work out until you cannot work out any harder – sort of a push-your-body-to-the-absolute-max type of deal. For some of us (whose bodies cannot handle being pushed to the absolute max) this seems like a living nightmare. For others, it’s exactly what gets them going. They love it the way I love Yankee games that start after 10 PM, cake, small puppies and hugs. For them, having the work out equivalent of someone screaming at you to WORK HARDER GODDAMNIT is like a great cup of morning coffee. No part of me can understand this, but I can at least accept it. God bless, CrossFit people, and please don’t injure yourselves.

I am sorry, though, that your workout-of-choice chose to make a tweet that was as un-nuanced as CrossFit itself. I get the spirit of it (sugary drinks are bad!) but the execution was lacking.

It’s more complicated than that.

A few months ago, I was changing my insulin pump when, due to some mechanics that would be way too tedious to explain here, I accidentally made a HUGE MISTAKE. Instead of loading the pump properly, I did it carelessly and in the space of 5 seconds had injected myself with probably 20-25 units of insulin.

This is a Big Deal. I take about 35 – 40 units of insulin in a given day. To take more than half of my entire daily dose in a few seconds was incredibly bad. To give you perspective: I might take 5 units for my lunch. In a single moment, I took five times that. I suddenly had an amount of insulin floating around my system that was 100% unnatural and very, very dangerous. Insulin usually starts working in about 5 minutes, and the more you have, the faster it works, so I realized I had probably no more than a minute or two before I was going to start feeling the effects.

Those “effects” would have been everything I feel in hypoglycemia x 1000. I was positive I would pass out, and legitimately worried I would … well, worse. Coma. Death. When I overdose insulin by a single unit I feel the physical effects in a major way. Raising that by a factor of 25 … well.

I panicked. As my legs started spasming (25 units will work fast, let me tell you), I called to my mom for help. As I mentioned, I had an unnatural amount of insulin in my body.

To combat it, I needed something equally unnatural.

In the space of 5 minutes, I downed 2 cokes, a full bottle of orange juice, and ate several slices of bread. Probably about 150 grams of carbohydrate. AND I DIDN’T DIE. In fact, my blood sugar held pretty amazingly steady.

To reverse this terrible overdose, I needed something that would work *fast*, not a temperate carbohydrate like a plate of strawberries or a bowl of oatmeal. In regular life, those “healthy” foods are great. But as most diabetics know, (and I mean Type 1s and 2s here!), our disease is terrible, unpredictable, and nasty. And sometimes things happen as a result of diabetes that disrupt that healthy diet.

“You’ve passed your sugar goal for the day!” <— This is what my My Fitness Pal app told me yesterday as I logged the SEVEN glucose tablets that I had had to eat during a particularly nasty low. Well, SO SORRY, My Fitness Pal, but I didn’t want to go to the hospital yesterday. Sometimes, the daily “sugar goal” becomes less important than the daily “staying alive” goal.

Look, I’m not saying Coke is good for you. I can’t really think of a situation where drinking a coke makes sense besides if you’re a diabetic in severe hypoglycemia. But before my pump disaster, I would have said there was NO reason to drink coke, ever. And then it saved my life. Which I say not as an exaggeration, but as a literal fact. A regular old Coca Cola saved my life.

So yeah, CrossFit wasn’t exactly nuanced, subtle or thoughtful with their fake Coke tweet. But anyone who would have expected different from CROSSFIT, the workout equivalent of an angry drill sergeant, is maybe a bit misinformed. Honestly, what this whole situation really leaves me with, more than anything else, is an ongoing frustration with our constant need to differentiate between Type 1 and Type 2 diabetes.

Well, no, I didn’t put that right. I definitely understand the need to differentiate between these two types of diabetes. Definitely. Having literally been stranded in between these two diseases without a definitive diagnosis for my first several months as a diabetic, I understand exactly how important and critical differentiation is. I guess what I more take issue with is the motivation. It just makes me sad. I don’t blame Type 1 diabetics for wanting to distance themselves from Type 2s – being a Type 2 diabetic in this country sucks. Not only are you stricken with a disease, you’re also shamed for it at literally every turn. It’s not fun. I want to live in a country where you can tell someone you’re a Type 2 diabetic without fearing that they’ll judge you for it.

I’m working on Type What Now right now, and going over this script reminds me of how painful the first several months of my diagnosis were. Not just physically. Mostly emotionally. I want to live in a country where I didn’t secretly wish I was going to be diagnosed with Type 1 diabetes because I would have been too embarrassed to tell people I’d gotten Type 2. Even though Type 2 would have been so much better – I would have had the opportunity to send it into remission, for goddsakes! I could have gotten off insulin!

Look, I know the arguments here. When you promote weight acceptance and a lack of shaming, people fire back that that indulges people, giving them permission not to take care of themselves, to neglect their health. And it’s true: a lot of people who have Type 2 diabetes got it because of “choices” that they made. But I would argue that, in a country that creates unrealistic and unachievable expectations on weight, where your socioeconomic bracket is an accurate predictor of your BMI because a dollar will buy you thousands of calories of soda but only a few dozen calories of broccoli, where our foods are manufactured to be addictive, and where the government classifies ketchup as a vegetable when it considers the “healthy” options it will offer to children… in light of all these things, I would argue that it’s not quite as simple as “just make the right choices.” And that maybe we do Type 2 Diabetics a disservice by assuming they are all lazy, neglectful, and slovenly, and that their battle would be easily won if they had more willpower.

Like coke, it’s a bit more complicated than that.