Last night I had the worst low I’ve ever had.

It’s not a particularly good story, unfortunately – this low came on like a typical low. We finished Type What Now rehearsal, said good night to Anne, and then Stefan and I walked out to the drugstore. (My new vice is treating myself to a Diet Coke after the emotional exhaustion that is a Type What Now rehearsal.) I got home and proceeded to organize my closet, and I was holding several hangers full of skirts when I suddenly felt it.

It’s very hard for me to describe how a low feels, or what the moment feels like when I first realize I’m probably low. Which is kind of a problem, as I fancy myself a writer, so you’d think I could figure out the words for it. But lows muddle. They come into your brain and shake them up until it’s all you can do to sort of wait for the particles to settle and hope that when they do, you’ll have your faculties again.

The best way for me to describe it is to say that I suddenly realized that my body was across the room. As in, the low disconnects your brain from the rest of you, and you have this moment of panic where you realize – hey, I think I’m supposed to be in that body — why am I not in that body? I also felt all the rest of the bullshit: shaky, cold but also hot at the same time, dizzy.

OK Jessie, I thought, Time to get juice.

Then Low Brain kicked in. Low Brain is the version of your brain when you are in the middle of a low. Unfortunately, Low Brain is a stupid idiot, while simultaneously insisting that it is right all the time. Low Brain’s number one feature is its insistence that you are not low. Or at least, that if you’re low, you don’t need to do anything about it. How’s that for irony? When you are low, one symptom is your brain’s insistence that you’re “just fine” and don’t need to do anything about it. It’s amazing, how good it is at making you believe you are A-OK. Here’s a conversation between me and my brain:

Anyway, despite Low Brain I managed to get to the kitchen and opened the pantry for a juice box. I was about to pull it out but then Low Brain reminded me that the pantry was kinda disorganized… so I started to organize it instead.

Then Stefan came in, and started saying words, but I suddenly realized I wasn’t especially hearing those words and that made me realize, “Hey Low Brain! You tricked me again!”

A new symptom began to kick in: a feeling of lightheadedness. And then it got intense. As I collapsed on the couch (energy was sapped) and began my saga trying to open the juice box straw (WHY?? WHY ARE THEY SO HARD TO OPEN??), a small part of my brain insisted that, hey, maybe the lightheadedness was a sign that consciousness would be the next to go.

I tested: 31. Yup, consciousness would have been the next to go.

Fortunately, I got some juice in my system before that happened.

So I did the responsible thing, you guys, and drank my juice box. But then, I did a ridiculous thing: I tested again.

See, OK — the lowest my blood sugar has ever tested, before last night, was 33. And there is a small, stupid, ridiculous part of me (the little kid inside me who loves to stare at blood or smushed bugs under rocks), that wants to see how low it can go. Can it go under 30?

I must have tested 5 times in about 3 minutes. I knew it would be on the rise because of the juice, so I really only had a small window if I wanted to see if it happened to come in under 30.

Alas, not this time. 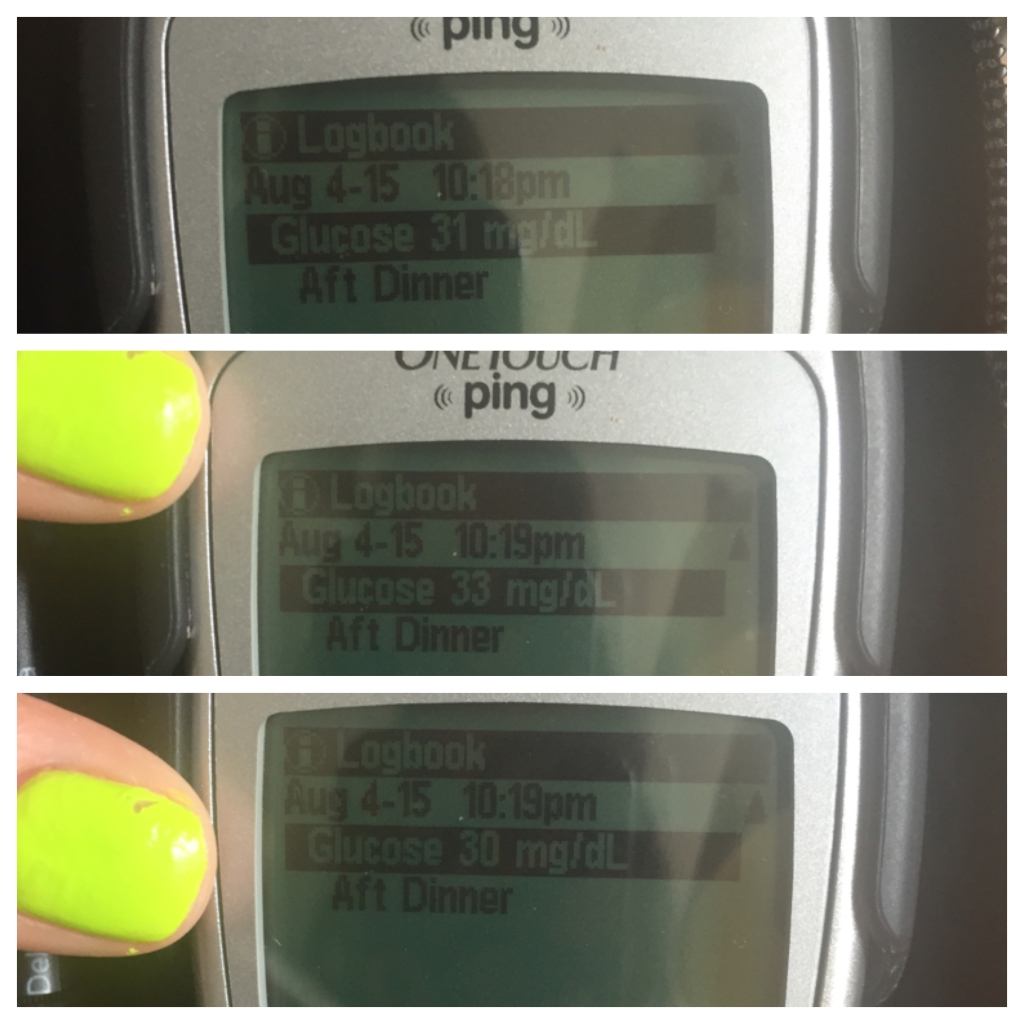