One of my most powerful memories of the first days after I was diagnosed with diabetes was the consistency with which medical professionals assured me “I’d still be able to have kids one day.” Honestly, I was probably told that 5 or more times, by 5 or more different doctors, nurses, diabetes educators, nutritionists, social workers.

At the time I found it bizarre and unsettling. Why were they so anxious to convince me of this? It was, quite frankly, the last thing I was thinking about, but as soon as it was brought up by a nurse I became suspicious. Obviously, the constant need to reassure me implied that there was much more to it, right? That actually it might be difficult, impossible?

And lord knows I wasn’t thinking about having kids, then or ever. I spent most of my life not really thinking about having kids. Similar to the way I spent most of my life not really thinking about getting married. I grew up fat and deeply self-loathing; weddings, fantasies about dresses and parties and diamond rings were for real women, pretty women, women who counted. I didn’t count. The thought of ever being loved enough to be proposed to was laughable, so for the most part, I didn’t think about it. When an errant fantasy of a white dress or a big cake or a baby floated into my head, I viciously admonished myself, flogged the idea until it was long dead, and moved on to the important and exhausting act of hating myself.

Over the last two years, things have changed. Not as cleanly or as triumphantly as this blog (or my show, for those of you who saw it) would have you believe, but they have changed. Slowly, painfully. I still get crippled by self-loathing sometimes. Just. Not all the time. Sometimes I feel OK about myself.

And now I find myself engaged.

Like all love stories, Stefan’s and mine is completely unique and comfortingly universal. And I do mean comforting: when you’ve spent your life mentally disqualifying yourself from universally joyous acts, designations, and relationships, suddenly finding yourself in the midst of the “typical” feels kind of like a miracle.

(Not that marriage is right for all humans, of course. I do not at all suggest that.)

Our relationship is private and flawed and perfect, just like yours with your lover; with yourself, with your family and friends. We have approached concepts like marriage in a thoughtful, often fraught, but deeply communicative way. We decided, mutually, that it was right for us. And for reasons specific to us, it was important to Stefan that he be the one to propose; so while I knew it was coming, it still took me by surprise. 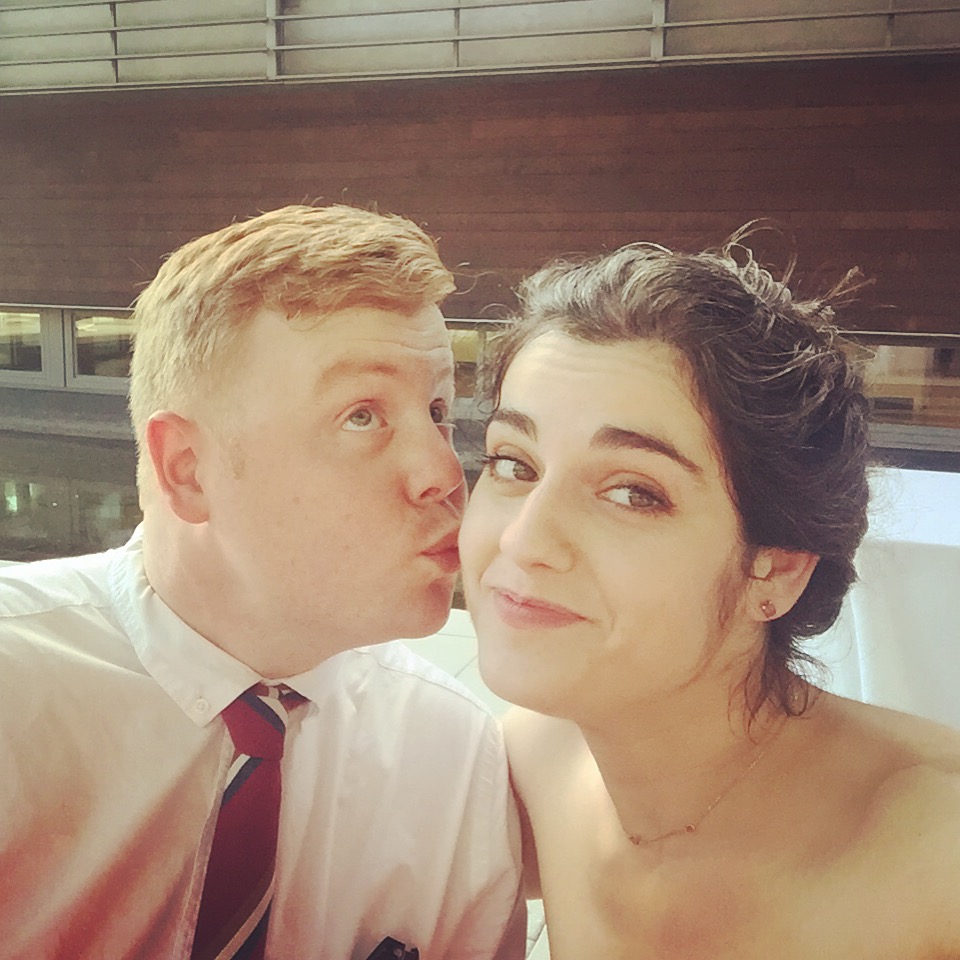 While my deeply private boyfriend (fiancé ?!) might object, I will tell you now how he proposed. We met in writing school, and our relationship began with the exchange of scripts—reading each others’ work, offering feedback. Recently, he’s been working on a pilot; on Monday, June 13 he chatted me to ask if I would mind reading a first draft with him that night. I agreed, and proceeded to pester him throughout the day in the way these stories typically go: he wasn’t paying enough “attention” to me on gchat, he was “being weird.”

And that night, we read the script together. And suddenly I was in it, as a character, and so was he. And while I was thinking “boy, this script has way too many in jokes to make sense to an outside reader, but how am I going to give him that note without offending him…?” it was building to what it was: a proposal, a written proposal, written by a man who’s voice I first discovered on paper, fell in love with on paper. And I cried, and he cried, and there was a ring (or two) and now we’re planning a wedding.

I’m reading this book by one of my favorite authors, Julian Barnes, right now. Flaubert’s Parrot. It’s about a guy who’s obsessed with the French writer Gustave Flaubert. In one particularly memorable chapter, our obsessive guy gives two biographies of Flaubert. Both are made up entirely of real facts from the writer’s life.

In one, he paints the portrait of a well-liked, well-adjusted, creative genius who lived a fulfilling and productive life. In the other, he describes a sickly, lonely, self-pitying man who’s life was plagued by loss.

Which is “true”? Well, many people he knew died, he had health issues, and in many ways he wasn’t recognized for his genius. But he also loved deeply, had many friends and lovers, was creatively productive, and was able to support himself as a writer.

It’s a pretty powerful message, and one I relate to a lot these days. Perspective is a critical thing.

On the one hand, my life is pretty fantastic right now. I’m getting married. I have a badass trip to Japan planned for 2 months from now. I have a niece, my family is well, I’ve managed to stay at my job for a whole year. Occasionally I get to update my blog, do some writing. Things are good.

On the other hand, I won’t lie to you guys. Things are also hard. I have NOT been doing a good job with diabetes. I’m a little terrified to see my endocrinologist next week. It’s been impossibly hard. Moreso than normal, and I find myself tremendously un-motivated. Nearly every day I experience the soaring feeling of despair as my blood sugar starts to spike, or tank, and I have to load up with insulin or juice (neither of which are things I want to be consuming excessive amounts of) just to get back to “normal”. A “normal” I feel I very rarely am actually at. I have so little time for writing, for my creative life, because my job has done what all jobs do and taken over. That, combined with how difficult diabetes has been recently, has meant that I’m barely doing even the slightest bit of creative work and my responsibilities outside of my job cause enormous stress.

So, which version of my life is it? Obviously, the “lesson” in Flaubert’s Parrot, and the lesson it probably seems like I’m getting at is… it’s up to me, right? I get to decide. And obviously, it’s more appealing to decide on the great version.

But here’s the thing. I don’t want to decide things are good. I don’t even want to think it. Because the fear of admitting things are good is a potent one for me. As messed up as this is, the second I acknowledge something is “good”, part of me immediately starts waiting for the other shoe to drop.

If things are good, what’s going to go wrong?

And I return, finally, to the start of this post. Now that I’m literally in the process of planning a wedding, it’s hard to deny that I am likely going to have one. So that leads me, slowly, slightly, cautiously, to the inevitable follow up. Might I, one day, have a kid?

It blows my mind when my friends talk about having kids one day. I just can’t wrap my head around their confidence — that it will happen, that kids are an inevitability. I somehow feel that, for me, it can’t, it just can’t be that easy. If it happens it will be fraught, impossible; somehow it’ll be a trial. Or it just won’t happen. Things just don’t “work out” for me like that.

Except, they kind of have, right? Because Stefan is amazing and I get to spend my life with him and that is so miraculously good that it feels somehow like I’ve been blessed by someone or something beyond my control.

And that, I think, is the mistake. If something bigger than me gave me everything I “have,” then it can take it all away, too.

But life is more complicated than that. It’s about luck, and fortune, yes, but it’s also about work and compromise and dedication and consent. I am an active participant in my happiness; a critical piece of it. I consent to it, I work for it, I earn it. I build it.

Stefan, in his brilliance, knows this. While I won’t share his proposal script in its entirety, I will share this one line that he wrote for himself. (Sorry! Forgive me!)

My love for you is so total that it is sometimes deceptive…
I don’t mean to say that I take our love for granted, just that it is so perfect that it seems like it had to have been willed into existence…
The truth, however, is that we built this love, together, brick by brick, ugly moment by joyous moment, over many years.

When things are good, so sublimely good, we can deceive ourselves into thinking that goodness is incredibly fragile, fallible. But if goodness and happiness are fragile, than I posit this: misery and challenge is just as fragile. Things are hard. But not all the time. And the hard doesn’t have to win. And the good isn’t some impossible dream or fantasy, a second away from being blown away in the wind.

So maybe it’s OK to cautiously admit that things are good. That maybe my body, plagued as it has been, could create a baby one day that would have almost the same chance of getting type 1 diabetes as if I didn’t have it myself (and that’s a true fact, given the circumstances of my diagnosis). That I am so, so, so lucky to be where I am. But that “luck” only tells one piece of the story.

And things are still hard, nonetheless. And I’m worried, perpetually, about my health, about my ability to manage diabetes. About the future.

Another rambling post, a lack, perhaps, of a concise and clear conclusion. Things are good. They are also hard. We’ll see. 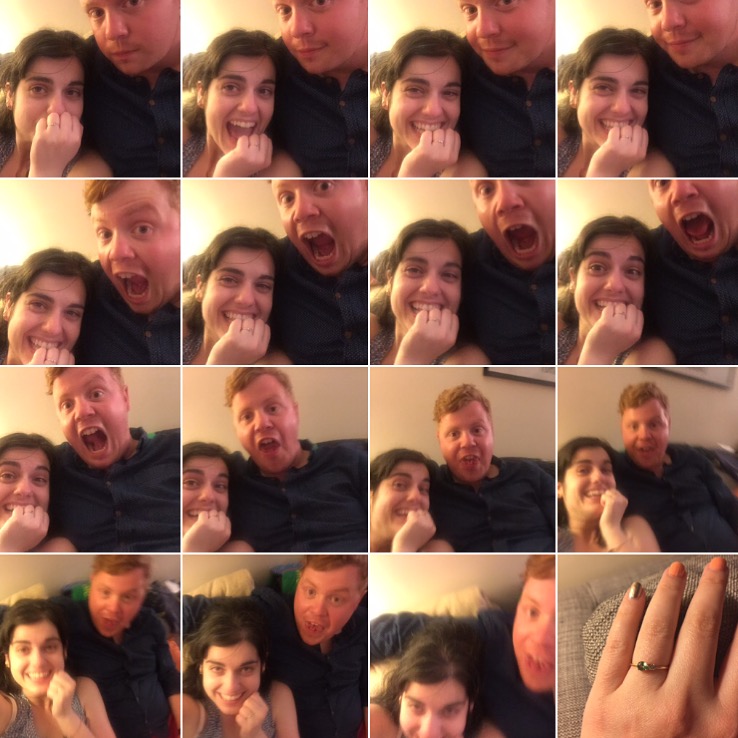 2 thoughts on “Happily Ever After”