All the best posts I’ve written on this blog have one thing in common.

They all have been a bitch to write—that is to say, they’ve required exposing myself and my vulnerabilities, failures, and weaknesses without reservation, just exposing them to the big empty internet and hoping someone takes notice, connects, listens without judgment.

This knowledge is pretty much all that has me typing right now—because I feel sick to my stomach doing it. Yeah, pretty much everything about the post I’m about to write has me sick to my stomach. The subject matter, of course, but also how bad it’s going to make me look and really, my fear of throwing my hat into the ring of political discussion these days.

I’m assuming most of my readers are my Facebook friends, which means that most of my readers are pretty vigorous liberals. There’s nothing especially brave about espousing liberal values to a crowd of liberals, so I haven’t been super motivated to write about politics these days: 99% of people reading this blog will agree with what I have to say, and the last 1% might feel unnecessarily attacked or maligned.

But I had kind of an interesting observation yesterday, and it felt worthy enough to share in light of previous posts. So share it I will.

Of all the posts I’ve ever written, the one I’m most proud of is called “On Beauty.” If you don’t feel like reading it (although you should, you really should — and if you know me, you know that I never boast about my own writing so I really must be behind this one to pitch it so hard), here is the basic gist:

Like most Americans, (and perhaps more specifically, most American females), I grew up a victim of portrayals of conventional beauty in the media. Even though I was taught intellectually to “know better,” it’s a very difficult lesson to learn on an emotional level, and two and a half decades of living in a body larger than society deems appropriate left me pretty battered by intense self-loathing. Despite all the incredible opportunities life presented me—economic, educational, etc—I felt fundamentally worthless. I was fat and even though I would have pretended to your face that I didn’t “care” and that I knew other things were more important, I didn’t really believe it, deep down. I would have given anything to lose weight. anything.

“On Beauty” represents the first, most fledgling moment in a difficult road of self-awakening. Where I began to learn, to really understand, on an emotional level (the most critical, innate and important type of knowledge) that there are, there really are things in life more important than physical beauty. Again, sounds really obvious when I write it out like this, but super hard to believe internally when you’re constantly bombarded with images of “beautiful” (read as: societally-acceptable-from-a-physical-standpoint) people.

I wrote “On Beauty” two and a half years ago, and the subsequent path to enlightenment has not been an easy one. It has been slow moving and full of setbacks. Hey guys, turns out losing weight doesn’t free you from the mantle of societal pressure to maintain an arbitrarily specific physical image!

In 2014 I lost about 70 pounds. In the last year, I’ve regained about 10 and face daily feelings of guilt and unworthiness and worthlessness and failure as I struggle to keep my blood sugar under control and lose these 10 pounds. Again.

So what does this have to do with Ivanka Trump?

Prior to her father having anything (real) to do with politics, I was a fan of Ivanka’s. As a teenager, I watched her on The Apprentice. She seemed super smart and put together in all the ways I never felt put together as a sloppy, overweight teenager. She represented a kind of physical perfection that I aspired to—knowing that I would never actually reach it. So in essence, she became a convenient way to hate myself.

And then she got married, and she had adorable babies, and her life just seemed to get glitzier and more beautiful and the literal definition of picture perfect. Have you ever seen her with messy hair? Jesus Christ, the effort it takes to look that good at any moment exhausts me without even trying. I don’t even need to try to know that I don’t have the energy to put even a fraction of that effort into my appearance.

And society, which profits greatly from me caring about my appearance, tells me that this is wrong. That Ivanka is the correct way to be female, and I am the incorrect way. That during the work week, sleeping until the last possible second in the morning then rolling out of bed and putting on the same pair of pants I’ve worn like, 10 days in a row (and which are honestly kinda starting to smell) and rushing out the door without a face full of makeup is shameful.

As the three-ring-circus that is the current political regime has unfolded, I observed Ivanka in a kind of bemused way. I couldn’t help myself still liking her, despite her obvious alliance with the President. I sort of told myself that maybe she was, you know, helping to mitigate some of his more frighteningly unconstitutional ambitions. Because she seems so put together! And she’s so pretty! And so soft-spoken and gentle and looks really sweet and goddamn it I wish I could be her!

It’s been a week of this President, and like millions, I am terrified. I am terrified. I have watched the past week play out with a persistent feeling of nausea and despair and fear; I wake up every morning sick to my stomach at what is going to happen that day.

When Trump signed his executive order on immigration last Friday, I watched, stunned, as the news began to trickle in about refugees and immigrants and legal residents being detained at airports, unable to enter the country to visit sick relatives, be reunited with their families, start the new lives promised to them. And even though I detest—detest—protests, there is no excuse, as a person of conscience, not to speak out, figuratively or literally, at this time. And so I joined the outraged, and the scared, and I marched and I donated and I wrote more damn postcards to my representatives (over 50 this week) and I prayed.

And then last night I got home and saw this:

And I subsequently saw this: 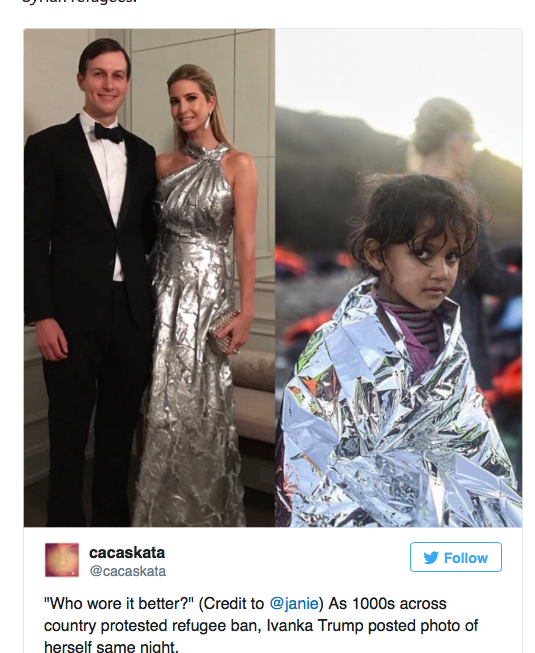 And I began to read about the fallout of Ivanka posting a glitzy picture of herself going to a freaking party celebrating Robert E. Lee‘s birthday.

Because if “On Beauty” was the first step in my journey to detach physical beauty from purpose, meaning or self-fulfillment, seeing Ivanka’s tweet was the final one.

And I feel nothing.

For the first time in my stupid damn life I feel absolutely nothing. It’s not “I feel a little twinge of jealousy but I suppress it” or “I feel my normal feelings of unworthiness but I know that they are insignificant and don’t matter so I ignore them,” it’s that I truly feel absolutely nothing looking at her.

How empty she is.

Wow. How empty it all suddenly is. No, it’s always been empty but I feel, (like, Greek tragedy-catharsis-level feel) that emptiness now. In my most sensitive and vulnerable heart. The one that hasn’t stopped aching since November 9th.

Isn’t it ironic that it took a president so obsessed with physical beauty to finally disabuse me of my obsession with it?

And freed from this, from this absurd cycle of self-loathing and the quest for physical perfection, I find myself fully disposed to fight. Fully available to know right from wrong, to defend the rights of those who need allies, to condemn hatred and hypocrisy and violence. For the first time in my life, I understand why I was born; why I am where I am and why my presence on this earth is a ball of unshaped potential, ready to be deployed however I decide. To be sucked into an abyss of useless superficial shit, or to be honed into a keenly awake, keenly aware human who lives by tenets of compassion and connection.

So thank you, Ivanka. Your absolute enslavement to superficial ideals has helped me to free myself from them, has provided me a key you seem unable access yourself. I am sorry that you had to be sacrificed so I could be free. I scrolled through your twitter account today, staring at pictures of your adorable children and your beautiful face and I felt sad for you. I am sad that you are going to be remembered as nothing more than a “mitigating agent” of evil, when in fact I suspect that thanks to your public persona, your family, your genes and your life choices, you are so much more a prisoner than I ever was to the forces that all women are oppressed by.

But do me a favor, if you’re reading this? Hug your children extra-hard tonight.

5 thoughts on “Thank you, Ivanka”