FINALLY, IT’S THE POST YOU’VE ALL BEEN WAITING FOR!!! J/K; apologies in advance if this subject matter is not your cup of tea.

Like many, I have a lot of ish with food sensitivities—from my straight-up allergy to tree nuts to my EOE allergy to (greek) yogurt to random other sensitivities to things like kiwis, pink peppercorns and sumac (cashew family)… the list goes on. Pre-diabetes, I had a lot of stomach issues that, when I was diagnosed and went through the EOE journey a few years back, I actually started to get a handle on. As my darling husband remarked the other day with a kind of pleasantly-surprised tone, “it’s actually been a while since you threw up!”

This is fortunate, because if there’s one aspect of diabetes management I haven’t mastered, it’s how to handle insulin/sugar when you’re sick to your stomach and throwing up. How does puking affect your body’s ability to absorb sugar? Does it “not count” because you’re throwing up the sugar you’ve ingested before it has an impact? Does having it in your mouth “count” enough towards it raising your blood sugar and you should dose normally? Does it count for half? I DO NOT UNDERSTAND.

The other day I tried a Daily Harvest smoothie I’ve never had before. I like their brand a lot—pre-packed, frozen smoothies that make lunch super easy, but every once and a while they really hit me wrong. In this case, it was a Pineapple Matcha Smoothie that promised to taste like a “green pina colada” — sounds good to me!

My body disagreed. Let’s go ahead and add “matcha” to my above list of food sensitivities, shall we? I dosed the appropriate amount of insulin for the smoothie, enjoyed it, and went about my day. Within 90 minutes, though, I was writhing on the floor of my bathroom, regretting every decision I’d ever made and praying for death. It’s a game I know well—exactly how my body punishes me when I eat something it doesn’t like. Since nothing else in the smoothie except matcha was new to me (I know, I’m lame and had never had matcha), I know it was the culprit.

Throwing up a pineapple matcha smoothie isn’t the point of this story, though; the point is what my blood sugar did afterwards. Forty minutes later, I was in the throes of a horrendous low; which I can only assume was because all the food I had insulin on board for had been expelled before the insulin worked on it? This was a bummer because I was still feeling kind of disgusting and didn’t exactly want to consume sugary foods when my stomach was barely settling, but besides the point. 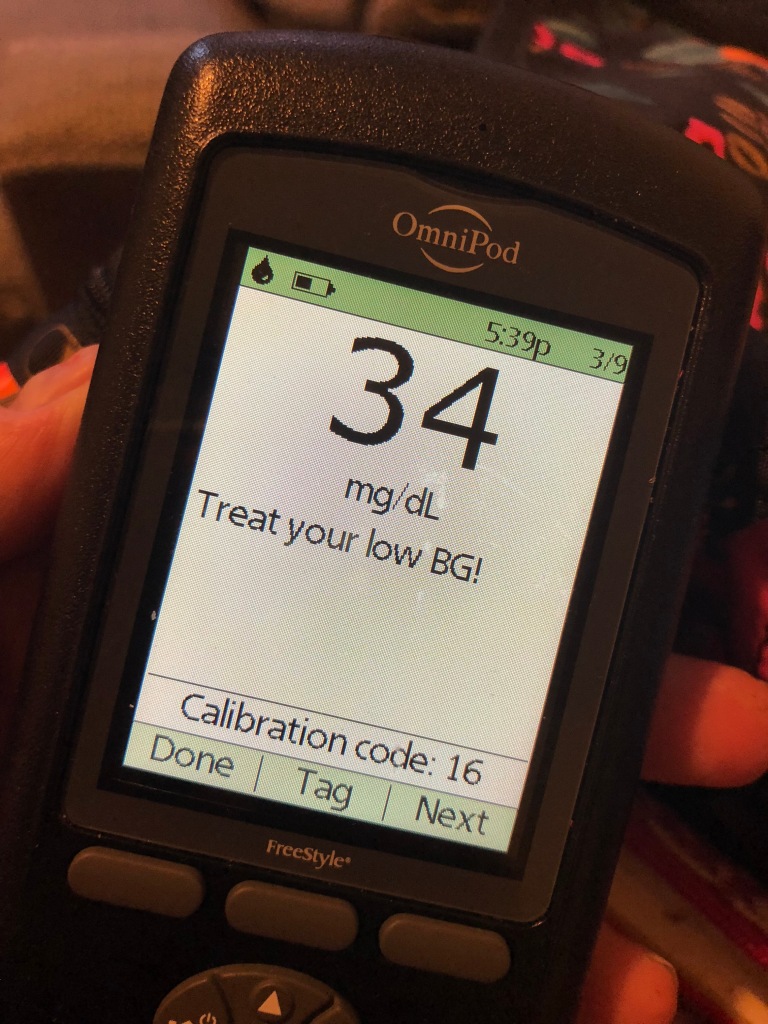 So I treated. And OK, maybe I treated a bit more aggressively than normal (a juice and and applesauce) but holy crap you guys did my blood sugar spike. I watched in horror as I went from the above 34 to about 334 in the span of minutes. Why!? Was this another result of throwing up? Sometimes I bounce back from lows much faster than other times; maybe because I’d expelled the contents of my stomach my body was primed to absorb better? That’s a dumb theory. But I’ve never had such an aggressive response to treating a low, and I can only imagine that the throwing up is the missing link here.

I don’t get it. Any one out there have a handle on puking and diabetes? My body has the temperament of an inbred European nobleman; it’s a capricious little bitch that will often decide it “can’t abide” something without notice, so I can’t imagine this is the last time this will happen. I should probably figure this out, because throwing up is bad enough. I don’t need a hypo event followed by a 300 point spike in the mix, too.